"With his camera, like magic it seems Daddy shoots pictures that capture my dreams."

About us and the Project 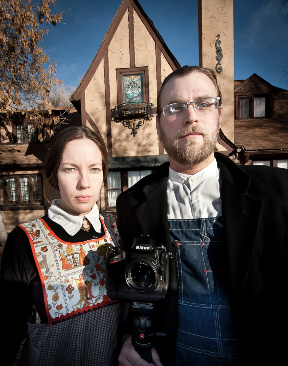 Blu is a commercial photographer. He first got his hands on a camera as a child and played at taking pictures until a teacher in high school encouraged him to start entering contests with his work and use the camera as an extension of his voice.

His images where very well received, winning prizes and most of all Blu was telling stories with his camera. Digital imagery opened up more opportunities for Blu and after receiving a scholarship to a photo school in Massachusetts; Blu started his Denver based photo studio. His arsenal of tools keeps growing but the backbone of all his pictures is still the story.

Katie fell in love with the stage as a child as a child and to this day she is fascinated with the power of story telling to unite people. She’s worked as an executive director, performed in, promoted, and costumed countless productions and directed youth theatre or a local community theatre group.

Since her daughters birth, she’s scaled back to performing monthly family friendly improv shows and entertaining her daughter, daily. As a mom, Katie prides herself on story time and is delighted that her love of storytelling has resulted in quality time with a daughter that adores books.

The birth of “Daddy’s Pictures”:

It started with a blog. As soon as our little one was able to start talking we started asking her what she saw in the pictures of her storybooks and we quickly learned that she preferred the realism of photographs to illustrations.

When she found some of her dads printed portfolios she started calling them “Daddy’s Picture Books” and making up her own stories for each of the pictures. Soon she began to comment on not only those images but the images being created and edited in our studio. We started posting her insights and remarks on a daily blog. Some of the images repeat on the blog because everyone, even a child, has favorites. While some of the pictures may not have made the cut for daddy’s needs or might be taken by friends or mommy’s phone, there is something about them that she wants to talk about and that is what we post.

This blog has been so much fun to work on as a family, it inspired us to share and attempt to capture her imagination through the lens of the camera. These images inspired a children’s books concept with the opening line

“With his camera like, magic it seems, daddy shoots pictures that capture my dreams. Dreams have no reason rhythm or rhyme, I can be anyone any place any time.”

An average shoot includes Katie, (mommy) tapping into her theatrical roots to scouts backdrops/build sets and costuming to create a fun playful environment. Then Blu (daddy) lights and shoots, as our little one is set free to explore and interact with her fantasy worlds.

After having a child and running a business some of the pastimes that once consumed us fell to the wayside. This project has allowed us to reincorporate aspects of the arts we enjoyed into our lives while being able to share them with our daughter.